So…I’m about to break my own rule. I mentioned in my opening post that my purpose in writing this blog is to try to find interesting cultural tidbits to blow off steam with, to slightly wean myself off of those wonderful, wonderful flashes of casual entertainment we’re all used to, such as YouTube videos, memes, or web comics.

But…what if you find a funny webcomic, mostly about procrastinating, rooted firmly in the highest echelons of academia?

Cover of the 4th book, by Jorge Cham.

Piled Higher and Deeper, also known as PhD Comics, is, in their own words, a “comic strip about life (or the lack thereof) in academia” (here’s a NYTs piece about the strip). Be it dealing with aggravating advisors, ODing on ramen and coffee, or merely fretting at the prospect of graduating (or not), the scenarios in this webcomic offer funny insights and plenty of cultural references as they portray various students trying desperately to survive and ease the pain of life in grad school. Ever since my coworker first sent the link to the site, I’ve been hooked on it. While I’m not a big fan of the early artwork (mostly crude black and white drawings, which eventually evolved to grey-scale), I love the currently smooth, colorful figures. I own the 4th book (see image above) and have not yet purchased the 5th (Adventures in Thesisland) by mere strength of will.

The creator, Jorge Cham, began the strip in the student paper at Stanford (his alma mater), and it has since grown to manage its own sustained site (updated regularly), 5 published books, several university speaking tours, and, most recently, its own movie. 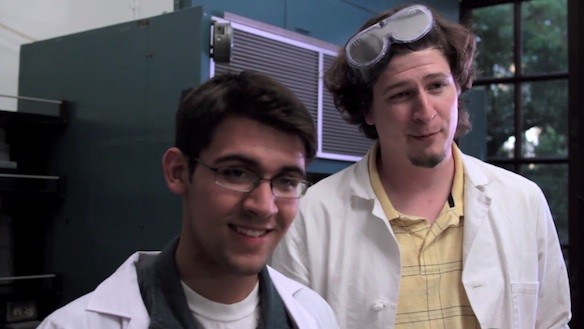 Raj Katti and Evans Boney as The Nameless Grad Student and Mike Slackenerny.

After watching the first trailer, I wasn’t too convinced I wanted to see a live-action representation of my beloved webcomic. The acting seemed amateurish, and I was worried there wouldn’t be much of a plot to go on.

But after seeing the second trailer, I figured I should give it a try. I was extra-motivated by the offer, for an extra $5, of the film’s soundtrack. It’s actually really great; my particular favorites include Blue Judy’s “Gone too Far” and SO3’s “Invincible”.

And wouldn’t you know it: the film is actually pretty enjoyable. It’s shot very well (brightly lit, tightly filmed, with amusing animations thrown in), and it manages to cram in several references to popular PhD comic jokes and tropes. Featuring all our favorite characters (Cecilia, the Nameless Grad Student, Tajel, and Mike), this one-hour feature is a good time.

So, considering a heat wave has suddenly rolled over the Northeast (or at least Boston), I think this is a good time to put down my books and pop something fun on my laptop for a funny, still-academically-oriented break.

This entry was posted in Literature, TV and Film. Bookmark the permalink.

1 Response to Merging Acedemia with Entertainment