Blue is the Warmest Color: Book and Film 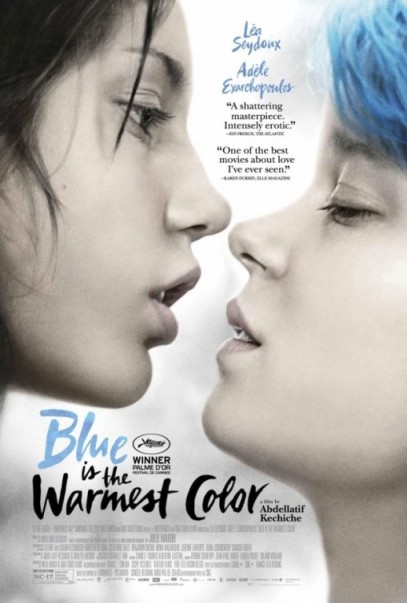 I’ve been dying to post about this graphic novel-turned-film for months now. But, because I am an asshat, I wasn’t able to see this film in theaters and had to wait until last week when it was released on Netflix Instant. This Palm d’Or winner from the Cannes Film Festival is an adaptation of the French graphic novel Le Bleu est un Couleur Chaude (Blue is the Warmest Color), a love story between the young and impressionable Clementine and the passionate and artistic Emma. The film, starring Léa Seydoux as Emma and Adèle Exarchopoulos as an aptly-renamed Adèle, takes the moving text and images of the graphic novel and sharpens, hones, and beautifully blows them out into a sensuous cinematographic experience. What I wasn’t expecting, however, is just how different an experience it would be to see the film compared to reading the comic.

This is not really a matter of “how well” it was adapted. The film is on the longer side (3 hours), and I happened to watch it in sections. The first third seemed pretty loyal to the book, but as it bled into the second third, I enjoyed the plot deviations and how those deviations really made the film an entirely different animal. I don’t think it spoils much to say that the graphic novel is, essentially, a gayer work (for an exploration of how the “gay” is taken out of the film, click here to listen to the lovely June Thomas discuss it on the Slate Culture Gabfest). By gayer, I mean the novel deals more directly with what it means for a young French girl in a predominantly hetero-normative environment to come to terms with her sexuality.

A panel from the novel by Julie Maroh.

The novel explores personal denial pretty thoroughly (often manifesting it in painful episodes of intolerant lashing out on behalf of Clementine), as well as portraying severe parental disapproval and a sense of ownership and privacy about one’s sexuality in way more detail and color than the film does. Essentially, the film is about an intense romantic relationship between two people, who just happen to be two women.

One glaring example of this can be seen in how both works portray the first sexual encounter between Clementine/Adèle and Emma. The novel builds and builds the tension between them, magnifying it with allusions to other emotional attachments and plenty of indecision regarding Clementine’s “true” sexual orientation. The resulting scene is tender, quite ardent, and poignantly hesitant. It is a passionate physical release delimited by gentleness, a gentleness born of the fear of the strength of such passion. The film rather unfortunately throws the two women into sex with no such restraints. While this would have made sense for sex scenes later in the relationship, I found the much-talked-of first physical scene strangely stilted, almost artificial in its straightforward hunger, stark lighting, and almost robotic focus. This was sex, and that was pretty much it.

And yet, in the bedroom and outside it, the single factor that keeps the film tied to the novel is the character of Adèle. The graphic novel goes to lengths (sometimes quite bald and unsubtle lengths) to emphasize how Clementine is uncomfortable with herself. But Exarchopoulos portrays an Adèle that is not comfortable anywhere. There are many lingering close-up shots of her face, struggling to seem fully engaged and carefree in a variety of social settings, and never quite sustaining it convincingly. Be it due to her sexuality, her social class, or her deep emotional distress and anguish, Adèle is doomed to be a fish permanently out of water.

A stunning Léa Seydoux as Emma. Image from thisisinfamous.com.

I found this to be the most painful thing about the film. I am exceedingly curious as to what it would be like to read the novel after watching the film; while the novel has a much more melodramatic and tragic ending, watching the film with the expectation of that ending made me realize just how close-minded my notion of tragedy really was. There is no cathartic release in the film, and I can’t tell if that fact was exacerbated by my expectations of what was supposed to happen.

In any case, go read and watch both versions of the story. The novel is touching in its youthful voice of insecurity and hopefulness, while the film is visually sumptuous and just as moving. And if you watch the film before reading the book, please let me know what this experience was like for you!