As Meghan O’Rourke wrote for Slate in this lovely piece on Rich’s legacy, “to read Rich at her best is to be gut-punched and brain-teased at the same time—a teaching both cerebral and visceral”:

In the old, scratched, cheap wood of the typing stand
there is a landscape, veined, which only a child can see
or the child’s older self, a poet,
a woman dreaming when she should be typing
the last report of the day. If this were a map,
she thinks, a map laid down to memorize
because she might be walking it, it shows
ridge upon ridge fading into hazed desert
here and there a sign of aquifers
and one possible watering-hole. If this were a map
it would be the map of the last age of her life,
not a map of choices but a map of variations
on the one great choice. It would be the map by which
she could see the end of touristic choices,
of distances blued and purpled by romance,
by which she would recognize that poetry
isn’t revolution but a way of knowing
why it must come. If this cheap, mass-produced
wooden stand from the Brooklyn Union Gas Co.,
mass-produced yet durable, being here now,
is what it is yet a dream-map
so obdurate, so plain,
she thinks, the material and the dream can join
and that is the poem and that is the late report.
October/November 1987 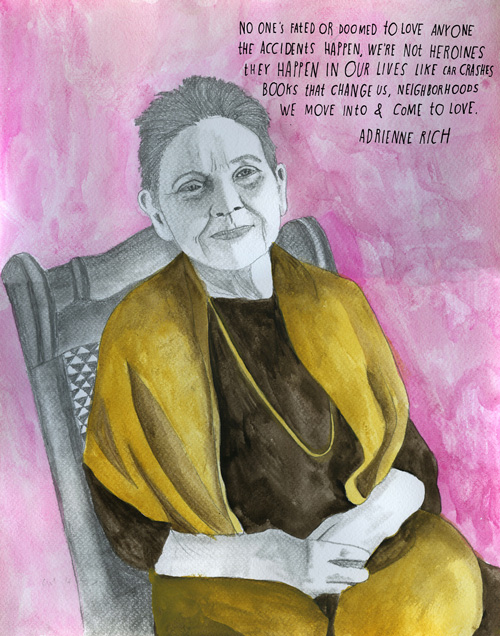 Illustration by Lisa Congdon for The Reconstructionists project

This entry was posted in National Poetry Month and tagged Adrienne Rich, Dreamwood. Bookmark the permalink.