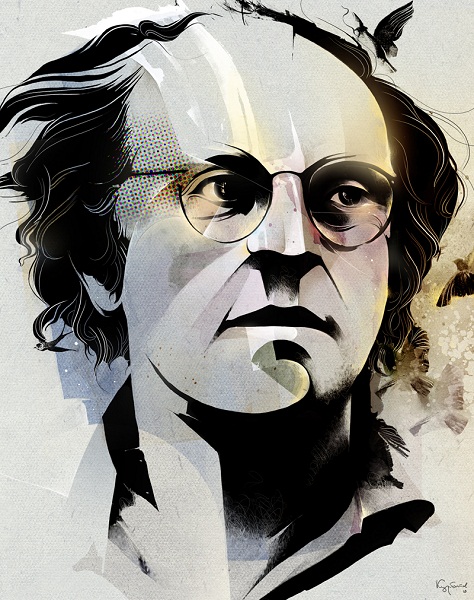 Russian poet, playwright, translator, and essayist, exile settled in America, Nobel prize winner, U.S. Poet Laureate: Joseph Brodsky was a polyglot with poetic talent to spare. He died of a heart attack at 55, tragically, and was buried in Venice, in the same cemetery as Stravinsky and Pound. Today’s choice is one of Brodsky’s many, many odes to the city of masks, bridges, and water:

I
Down in the lobby three elderly women, bored,
take up, with their knitting, the Passion of Our Lord
as the universe and the tiny realm
of the pension Academia, side by side,
with TV blaring, sail into Christmastide,
a lookout desk clerk at the helm.

II
And a nameless lodger, a nobody, boards the boat,
a bottle of grappa concealed in his raincoat
as he gains his shadowy room, bereaved
of memory, homeland, son, with only the noise
of distant forests to grieve for his former joys,
if anyone grieved.

III
Venetian church bells, teacups, mantel clocks
chime and confound themselves in this stale box
of assorted lives. The brazen, coiled
octopus-chandelier appears to be licking,
in a triptych mirror, bedsheet and mattress ticking,
sodden with tears and passion-soiled.

IV
Blown by night winds, an Adriatic tide
floods the canals, boats rock from side to side,
moored cradles, and the humble bream,
not ass and oxen, guards the rented bed
where the window blind above your sleeping head
moves to the sea star’s guiding beam.

V
So this is how we cope, putting out the heat
of grappa with nightstand water, carving the meat
of flounder instead of Christmas roast,
so that Thy earliest backboned ancestor
might feed and nourish us, O Savior,
this winter night on a damp coast.

VI
A Christmas without snow, tinsel, or tree,
at the edge of a map- and land-corseted sea;
having scuttled and sunk its scallop shell,
concealing its face while flaunting its backside,
Time rises from the goddess’s frothy tide,
yet changes nothing but clock hand and bell.

VII
A drowning city, where suddenly the dry
light of reason dissolves in the moisture of the eye;
its winged lion, which can read and write,
southern kin of northern sphinxes of renown,
won’t drop his book and holler, but calmly drown
in splinters of mirror, splashing light.

VIII
The gondola knocks against its moorings. Sound
cancels itself, hearing and words are drowned,
as is that nation where among
forests of hands the tyrant of the State
is voted in, its only candidate,
and spit goes ice-cold on the tongue.

IX
So let us place the left paw, sheathing its claws,
in the crook of the arm of the other one, because
this makes a hammer-and-sickle sign
with which to salute our era and bestow
a mute up-yours-even-unto-the-elbow
upon the nightmares of our time.

X
The raincoated figure is settling into place
where Sophia, Constance, Prudence, Faith, and Grace
lack futures, the only tense that is
is present, where either a goyish or Yiddish kiss
tastes bitter, like the city, where footsteps fade
invisibly along the colonnade,

XI
trackless and blank as a gondola’s passage through
a water surface, smoothing out of view
the measured wrinkles of its path,
unmarked as a broad “So long!” like the wide piazza,
or as a cramped “I love,” like the narrow alleyways,
erased and without aftermath.

XII
Moldings and carvings, palaces and flights
of stairs. Look up: the lion smiles from heights
of a tower wrapped as in a coat
of wind, unbudged, determined not to yield, like a rank weed at the edge of a plowed field,
and girdled round by Time’s deep moat.

XIII
Night in St. Mark’s piazza. A face as creased
as a finger from its fettering ring released,
biting a nail, its gazing high
into that nowhere of pure thought, where sight
is baffled by the bandages of night,
serene, beyond the naked eye,

XIV
where, past all boundaries and all predicates,
black, white, or colorless, vague, volatile states,
something, some object, comes to mind.
Perhaps a body. In our dim days and few,
the speed of light equals a fleeting view,
even when blackout robs us blind.

From the Collected Poems in English (2000)