First order of business: today is the 450th birthday of the inimitable William Shakespeare. Celebrate accordingly. 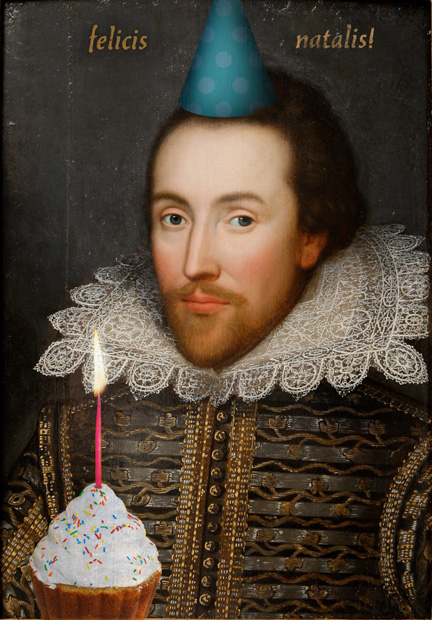 Secondly, it’s time for some poetry:

Although I try not to repeat poets, to excerpt from the Epic of Gilgamesh is to also mention its wonderful translator, David Ferry, about whom I wrote last year. So I will include an excerpt of the Mesopotamian epic about the eponymous legendary king and his anguished grappling with death, as well as an original poem by Ferry:

of him who knew the most of all men know;
who made the journey; heartbroken; reconciled;

who knew the way things were before the Flood,
the secret things, the mystery; who went

to the end of the earth, and over; who returned,
and wrote the story on a tablet of stone.

He built Uruk. He built the keeping place
of Anu and Ishtar. The outer wall

shines in the sun like brightest copper; the inner
wall is beyond the imagining of kings.

Study the brickwork, study the fortification;
climb the great ancient staircase to the terrace;

study how it is made; from the terrace see
the planted and fallow fields, the ponds, the orchards.

This is Uruk, the city of Gilgamesh
the Wild Ox, son of Lugalbanda, son

of the Lady Wildcow Ninsun, Gilgamesh
the vanguard and the rear guard of the army,

Shadow of Darkness over the enemy field,
the Web, the Flood that rises to wash away

the walls of alien cities, Gilgamesh
the strongest one of all, the perfect, the terror.

who measured the world; and sought out Utnapishtim
beyond the world; it is he who restored the shrines;

two-thirds a god, one-third a man, the king.
Go to the temple of Anu and Ishtar:

open the copper chest with the iron locks;
the tablet of lapis lazuli tells the story.

“In the Reading Room”

Alone in the library room, even when others
Are there in the room, alone, except for themselves,
There is the illusion of peace; the air in the room

Is stilled; there are reading lights on the tables,
Looking as if they’re reading, looking as if
They’re studying the text, and understanding,

Shedding light on what the words are saying;
But under their steady imbecile gaze the page
Is blank, patiently waiting not to be blank.

The page is blank until the mind that reads
Crosses the black river, seeking the Queen
Of the Underworld, Persephone, where she sits

By the side of the one who brought her from Enna,
Hades the mute, the deaf, king of the dead letter;
She is clothed in the beautiful garment of our thousand

Misunderstandings of the sacred text.