Posted on September 17, 2014 by fabianamcabral 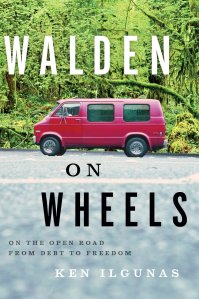 Back in April 2013, I was very taken with an article I read in the New York Times titled “When Home is a Campus Parking Lot.” The article recounted how Ken Ilgunas, the author, paid off $32,000 in student loan debt in a few short years by working in a remote outpost in Coldfoot, Alaska, and prevented himself from incurring more debt while acquiring a graduate liberal arts degree at Duke by living out of a Ford Econoline van. I was finishing up my first year of grad school in English lit at Boston College when I read the piece, and I posted the article link on our Facebook page (aptly named “The Beautiful and Damned”), hoping other grad students would enjoy its candor and heartfelt promotion of simplicity in life and detachment from worldly things.

Later that summer, as I planned the curriculum for the writing class I would be teaching Fall of 2013, I added Ilgunas’ essay to the syllabus segment on personal narrative. I admired how Ilgunas had questioned the status quo of what passed for an “acceptable” middle class existence in affluent America, and wanted my students to consider what made his writing compelling, even if they didn’t share the values he was advocating for. To quote from the article:

“I began to bring into question what passed for ‘normal’ down in the lower 48, especially when it often led to a lifetime of work, bills and Bed Bath & Beyond purchases. Out of debt, I felt for the first time that my life was my own, and that I could do whatever I wished with it.”

While I personally was not terribly interested in swooning, over-romanticized perceptions of Thoreau, I was interested in someone experiencing such a paradigm shift. I commended Ilgunas for his willingness to dismiss the dominant culture of consumerism, and for entertainingly recounting his experiences with equal measures of bravado and self-deprecation.

Shortly after the article was published, the memoir from which it was extracted was published as well: the book is called Walden on Wheels: On the Open Road from Debt to Freedom. But it wasn’t until a year and a half later, when I found myself balancing a full-time job at a bookstore with a part-time job on the Freedom Trail, budgeting my earnings scrupulously, feeling worn out and in need of inspiring reassurances that a simple life of hard work and little spending was a happy one, that I decided to pick up Ilgunas’ book and read it. While I was excited to set out on his personal journey with him, somewhere along the way I found myself separated from my Thoreau-wannabe guide, and seriously questioning the way he viewed the world, the values he professed, and the way he disdainfully cast the need for society and culture.

I was with him in the beginning. Our unlikely hero is a mediocre highschooler-turned-listless-college-student who warms to his university courses just as he leaves school. Ilgunas captures vividly and with much self-awareness his youthful intellectual apathy, his suburban upbringing, his sleep walk into debt, and his general lack of vitality. But one day, the Home Depot employee with a mountain of debt decides to break with his grey existence and set out for the “wild.”

Many humorous anecdotes ensue. Ilgunas cuts his teeth as an outdoorsman through his many escapades as a tour guide and cook in Coldfoot, Alaska. Mountains are climbed, tourists are generous with their tips, addicts and alcoholics roam unchecked, new horizons begin to unfold. And yet our hero feels discouraged. Despite this unique chance to get out of debt as fast as possible (few expenses and free room and board guarantee that almost every penny is directed towards his loans), he feels frustrated. Advantageous situations (i.e. dumb luck in a shitty job market) do not inure we masses of underpaid twenty-somethings from dissatisfaction and troubling doubt, and I liked that Ilgunas was willing to acknowledge that:

“I sat in my room, alone, with a stack of books that I had no desire to read, beset by a constant, nagging, raging restlessness.” (69)

Post Coldfoot, our hero experiences a flurry of new worlds. He sings the praises of hitchhiking, spending plenty of time sneering at what he perceives to be an overly-cautious America that frowns on the activity, this fearful attitude the fruit of “B-rated horror movies and fear-mongering news media organizations” (96) (that’s just a tiny bit easy for a white guy to say about accepting rides from “lonely, middle-aged males” (136), but whatever). Then it’s off to an (astounding) trip reenacting the trek of eighteenth century voyageurs; part of a crew of five, Ilgunas and his group spend two months paddling 1,500 kilometers along the rivers and lakes of Ontario, Canada, using only the clothes and supplies available to the original voyageurs. Afterwards, it’s off to play the role of “crew ascetic” (125) as an AmeriCorps trail crew member in Gulfport, Mississippi.

In Gulfport, Ilgunas meets wild child Sami, and he relates her painful back story with obvious affection and care. And yet, the patronizing tone that has been seeping into the story begins to flow more freely here: “She reminded me of myself when I decided to drive to Alaska and climb Blue Cloud years before…” (134); “Despite her brush with depression and death, despite all the poverty and destitution she saw in Mississippi, she still really believed that this was one big, happy world” (135); “I begged her not to go [hitchhiking alone], but there was a part of me that knew such an adventure might be good for her” (135). Perhaps I could overlook this tendency to refract Sami’s personality through Ilgunas’ desire to be her protector were it not for the fact that Ilgunas also offers us a tainted window into the world of his best friend Josh, an accomplished young man struggling with his own mountain of debt and forced to take on an ethically questionable job at an online university to pay it off. I say tainted because, while I have no doubt Ilgunas cares deeply about both of his friends, to prop up their stories so disadvantageously against his own makes an underlying condescension inevitable. How else am I supposed to interpret Ilgunas’ pity towards the “dull, tired, sleepy version” of his good friend, the Zombie Josh who is “unable to skip town like I could,” tied as he is to a girlfriend, her home, and “an endless series of his girlfriend’s friends’ weddings and baby showers” (165)? Although Josh ends up standing up for his life and his dreams and his morals, I think it was a bit cheap to cast him as yet another conformist victim who refuses to lead a meaningful life, unlike that of his wise buddy Ken.

The hero I had followed through the wild vanished into the foliage; the person who reemerged seemed to think himself holier than any around him. Suddenly, his constant reduction of established notions of comfort and conformity with the broad term “civilization” became less amusing and more grating. I almost threw the book against the wall when Ilgunas, after railing against suburbia and urbanization and the destruction of previous modes of living in exchange for technology and trash, consumerism and conformity, graciously conceded that “Of course I thought civilization, with its vaccines and bug sprays and its libraries and theaters, was real and had value too” (151). Thank goodness for that! His distinctly anti-cultural attitude is philistinic, and belies his professed interest in the liberal arts. His disdain for those affected by the 2008 economic crisis is borderline offensive (“I couldn’t have cared less about this ‘Great Recession’…As the rest of the country ran around flailing their arms and screaming in their underwear, I watched, half sympathetic, half amused” (180)).  These un-nuanced views made his descriptions of Josh and Sami and how they have led their lives seem all the more self-aggrandizing, self-serving, and a bit mean. The traveler I was journeying with was now an intolerant, priggish, smug jerk.

I was almost unmotivated to get to the part I had anticipated the most: his two years living in the van. I shuddered to think of what Ilgunas would say about graduate school, where most people do not live “ascetic” lives. Turns out, he had surprisingly little to say about classwork that didn’t relate to his interests in biology and the outdoors. However, he was able to  recuperate some of his original, clear-eyed judgments of his own short-sightedness, like, for example, his extreme aversion to receiving gifts, and his misconstrued notions of how much of a hermit Thoreau really was.

But while he admits that, despite his desire for a Walden of his own, he discovers that he needs society, that he feels isolated and alienated in his monk’s cell, I guess he has narrow notions of what kinds of society and community can be nourishing. He talks plenty about not getting laid and not having friends. But when he focuses on his peers, he doesn’t see them as people so much as examples of bad career choices, poor souls who would have been better served living the kind of life Ilgunas has led, on the road and in the wilderness. He doesn’t talk about the children he tutors at an elementary school, and the impact he is having on them; he talks about how much money the job gives him. He doesn’t talk about any meaningful conversations with his professors, and what insights they could have taught him; he talks about how these professors prepare brilliant Duke students to be sucked up by a giant vacuum and “emptied out on Wall Street” (243). By then, I was weary of this anti-finance tirade; as Felicia Nimue Ackerman, a professor of philosophy at Brown University, pointed out in a letter to the New York Times Book Review published September 7th, is it so hard to believe that “some university graduates find careers in finance just as engrossing, stimulating, and fulfilling as…[those] in philosophy and literature?” I guess it is, for someone who so proudly rejects “civilization” as a softening and decadent force for evil in the world.

Ilgunas is a good writer, and much of what he writes about the beauty of the natural landscape and the kindness of strangers is moving and compelling. But I was dismayed to see that, despite the title of the book, he doesn’t have much to actually say about literature, philosophy, or art (you know, some of the liberal arts). His sentimental, anti-intellectual attitude may have been ameliorated by his entertaining pen, but reading his book has made me think about the arrogance that the spartan life can inspire, as luring as the lazy trap of a life of decadence.