Posted on December 17, 2014 by fabianamcabral

I’m still trying to recover from my disappointment with the new documentary film Regarding Susan Sontag (2014). I eagerly anticipated a film in which I would learn about Sontag’s professional and personal life; about her books, her role as public intellectual, her impact on culture, and her friendships and personal relationships. While Regarding Susan Sontag, directed by Nancy D. Kates, checks off all these boxes, the visual and musical presentation of the film is distracting at best, utterly foolish at worst, and the direction seemed to imply a fear of irrelevance regarding its subject matter. “If we don’t ‘jazz up’ this film about Sontag’s life,” Kates’ thinking seemed to go, “no one will want to watch it.”

The best thing I can say for the film is that it wins points for breadth, if not depth. It spans in non-linear order from Sontag’s birth (as Susan Rosenblatt, in New York City, 1933) and her unusual upbringing and childhood in Arizona and California, through college at Berkley and the University of Chicago, an early marriage to Philip Reif, to her emergence onto the literary scene. The film mostly skips over her stints at Harvard, Oxford, and the Sorbonne, choosing to cut a path through her most famous books and lovers, pausing to detail her various bouts with cancer, including the one that ended her life in 2004.

Via The New Yorker archives

I was intrigued with the emphasis the film placed on her homosexual relationships over her heterosexual ones. A quick clip from Fran Lebowitz (a little too late in the film) makes a succinct point: for all the freedom and decadence of the 60’s, Sontag lived in the age of the “open secret,” when everyone pretty much knew, but it was still not really acceptable for a woman to come right out and say what her sexual preferences were. The film compensates for a lifetime of silence by dragging us through a slew of lovers: Harriet Sohmers Zwerling, Maria Irene Fornés, Eva Kollisch, Nicole Stephane, Lucinda Childs, ending with Annie Leibovitz. Interestingly, the woman with whom Sontag was involved with for 15 years got about 15 minutes of screen time. I imagine this may have had something to do with Leibovitz declining to appear in this movie.

While there are some brief mentions of male relationships, the film seems gleeful to take up Zwerling’s characterization that “men left [Sontag] cold.” There is a brief mention of Jasper Johns, and no mention of Joseph Brodsky, and we are led to believe her marriage to Rief was a complete sham. It’s a shame that Sontag’s sister, Judith Sontag Cohen, is one of the only voices in the film to provide some balance; she pointedly notes that Susan’s marriage to Reif seemed to be based on more than just intellect, even if it eventually fell apart.

Putting aside the borderline-prurient interest in Sontag’s romantic affairs, I take issue with the lack of engagement with Sontag’s intellectual ideas. The film dutifully recounts her writing milestones, from her first novel The Benefactor, to her much more popular and engaging essays and books, such as “Notes on Camp,” Against Interpretation, On Photography, Illness as Metaphor & Aids and Its Metaphors, the award-winning novel In America, etc.). But the film seems to be satisfied with sound bites from some contemporary writers and scholars (with no institutions listed for the latter, I might add) before zipping on, refusing to delve deeper into what may have been even quite flawed ideas. 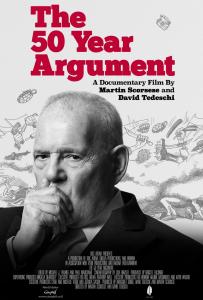 If you are concerned the ideas are dated, you should take the time to explicate them. In any case, it seems to be less a matter of time than of savvy film-making. I’ve recently been obsessed with the film about the history of the New York Review of Books, The 50 year Argument (2014), and, frankly, I feel I learned more about Sontag’s thoughts from the 15-20 minutes of footage dedicated to her in that film than from this whole new documentary. In the Scorsese film, they framed footage of Sontag discussing the disturbing power of photographs in a Leica commercial with a handful of her own images; they included the clip of her question to Norman Mailer in “Town Bloody Hall,” usefully presented in conjunction with Gore Vidal’s review of Eva Figes’ book Patriarchal Attitudes; and they included an interview in which Sontag discusses what it means to be a writer, and a “person of honor” who tries to “do the best one can.”

The closest this new film got to a deep reading of Sontag’s text was in Patricia Clarkson’s narration of Sontag’s words. While I enjoyed Clarkson’s narration, her rendition quickly lost power with overuse and overlapping confusion. Any moment someone was not being quoted from an interview, or dissonant jazz music was not blaring through some ridiculous artsy transitional visual, Clarkson’s voice wafted throughout, speaking words quoted out of context. 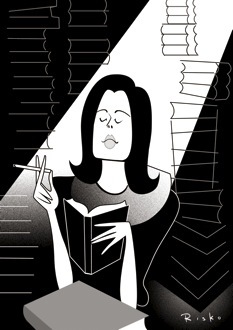 The continuous failure to deeply engage with themes in Sontag’s work made for a peculiar kind of irony that infected the whole project. The talking heads speak of Sontag’s wariness of images, how images “consume public space for thinking,” and yet the filmmakers saturate the entire movie with possibly every existing image of Sontag they could find. Rather than critiquing Sontag’s occasional over-dependance on style over substance, the film thrives in persistent stylistic and archetypal allusions to “Greenwich Village in the 60’s,” and the “Beat writers,” and seedy New York and Paris underbellies, with corresponding film clips. As if this was not silly enough, we are treated, nay, bombarded with ridiculous, ludicrous, visual trick transitions: hanging mobiles of typewritten pages, jars of bubbling water filled with typewriter keys, bottles with Sontag’s pictures being flooded with sand, wooden painted blocks of letters spelling out Sontag’s name and book titles, footage of the Vietnam war spliced almost out of recognition with Julie Taymor-esque zeal, and, in one instance, (I’m not making this up) a letter written by a friend giving notice of Sontag’s first cancer illness disintegrates, the letters flying off the page to reform into a collage image of (you guessed it) Sontag’s face. My fellow viewer and I, who had long before begun a juvenile drinking game in honor of the film’s many tics, added a particularly off-color one we dubbed “cancer eyes”: “Drink every time you see footage of dividing cancerous cells floating in front of an image of Sontag’s eyes.”

Ironically, it isn’t until her death that the film treats us to something other than stock sumptuous nostalgia: an actual critique of Sontag’s legacy. Her own disappointment with what she achieved could have been an interesting anchoring point for various points in the film. Why not hear more about how she did and didn’t contribute to the feminist movements Germaine Greer and Diana Trilling were dueling with Norman Mailer over? Why not unpack why Gore Vidal thought she was worthless as a novelist? Why not delve even more into the role of the intellectual in wartime? Or debate Fran Lebowitz’s disdainful dismissal of Sontag’s project in Sarajevo during the siege, Lebowitz’s contemptuous assertion that “Military action stops genocide, not productions of Waiting for Godot“?

The presence of smart thinkers like Deborah Nelson and Darryl Pinckney, the substantial and moving testimony of Judith Sontag Cohen, and the bajillion photographs and film clips of Sontag are not enough. This lightweight portrayal of Sontag’s life is far too enamored of its own artistry to do the one thing Sontag said she always strove for in her work: to “Be serious.”