Posted on March 1, 2015 by fabianamcabral 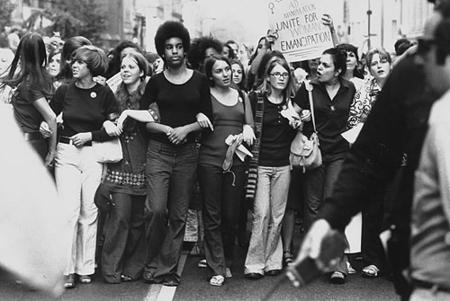 In 2013, an assistant professor at the history department of Boston College thought there was a problem with many students’ attitudes on feminism. The few undergraduates who espoused feminist views seemed afraid to make those views public. In response, Arissa Oh pitched for an event that would become known as BC’s “Feminist Coming Out Day.” On March 10th, progressive students and faculty sported maroon and yellow buttons (the school’s colors) blazoned with the phrase “This is what a feminist looks like.” When I heard about this project (taking place during my first year in grad school), I thought the idea was great, and happily accepted a button. About a week later (on my birthday), I went to a bar to have a celebratory drink, wearing my button pinned to my vest. I chose the place where my favorite bartender had recently started working, at a downtown bar I didn’t usually frequent. When I sat down, the jolly, twenty-something-year-old Irishman took one look at my button, made a face, and said, “What’s up with that? You’re not a feminist are you?”

I can’t say I blame my favorite bar-tending Irishman, because he wasn’t the only man to make that remark to me that night. Though I sat happily consuming free (very full) glasses of wine on my 24th birthday, I quietly ruminated over the sadly unsurprising responses to my little piece of visual activism. And I grew increasingly irritated at playing the following, very simple paradigm-shifting game:

“So you’re not a feminist?”

“Do you think women are inferior to men?”

“Do you think women should be treated equally to men, socially, economically, politically?” 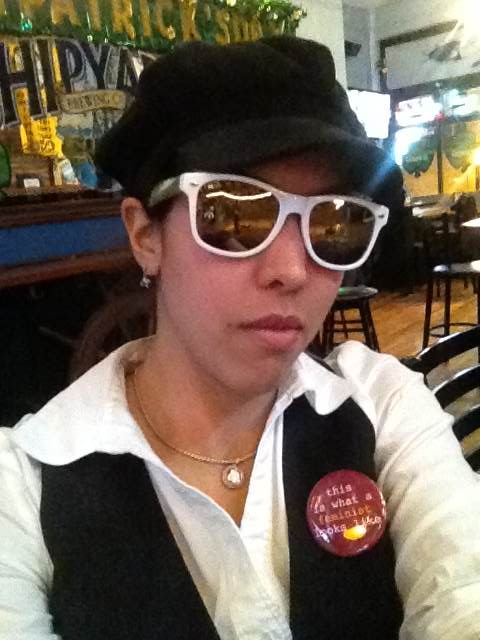 This is what this feminist looked like, back in that bar in 2013.

The fact of the matter is, too many people still consider “feminism” to be a dirty word that evokes grubby images of 1970’s women with free-flowing hair gleefully burning bras and kissing other women who don’t fit the script of the typical straight man’s lesbian wet dream. Or it evokes the archetype of the verbally violent woman who asserts her superiority over men. People assume a feminist “hates” men, blames every issue affecting women on men, thinks marriage and raising children is out of the question, etc., etc. I can’t blame everyone who still holds this assumption.

In full disclosure, as late as 2011 I, too, made the inane assertion to a friend that the whole “feminism thing” seemed dated since women, you know, were basically almost caught up in their share of human rights, and considered pretty equal to men. I don’t judge my ignorant past-self too harshly: being spoon-fed the super fun slogans of “Girl Power!” during my 90s elementary school years spent watching The Powerpuff Girls and Charlie’s Angels and listening to the Spice Girls, everything seemed cool. I then went on to spend my teen years in Venezuela, a country saturated with typical Hispanic machismo yet in which women exercise a much bigger role in family politics, in the media, and even in government, than they often do in the USA. I assumed everything was, you know, fine. Until I saw it wasn’t.

While the history of feminism is extensive and incredibly complex, the new documentary She’s Beautiful When She’s Angry does a great deal to cover the cultural revolution that shook the world from 1966 to 1971. Featuring footage and interviews of the likes of Betty Friedan, Kate Millet, Germaine Greer, Jacqui Ceballos, Rita Mae Brown, Susan Brownmiller, Susan Griffin, and others, this baller fantastic documentary is comprehensive in scope yet well-paced and excellently edited.

A general overview of women’s liberation transitions into the role of black women in representing their own distinct liberation, before transitioning into lesbian activism and how that movement was considered divisive and controversial to many in the cause. Child daycare, abortion, domestic violence, rape, healthcare, equal pay for equal work, the various books that espoused these views, the leaders that bolstered but also occasionally shook the foundations of their chapters and organizations: this film is a great fix to charge your feminist batteries and get your historic juices flowing. An added bonus? The film covers the symposium celebrating the 40th anniversary of the groundbreaking work Our Bodies, Ourselves, which took place in 2011 at my alma mater, Boston University. I was tickled to recognize the Tsai Auditorium.

Locals should check it out at the Coolidge Corner Theatre through Thursday, March 5th. Others should find a screening nearby.

Remember: “Information inspires action.” So hop to it.

A/N 3/8: The run has been extended until March 12 at the Coolidge Corner Theater! Don’t miss out!!

This entry was posted in Current Events, History, TV and Film and tagged Our Bodies, Ourselves, She's Beautiful When She's Angry. Bookmark the permalink.